Title: The revolution/Frenzy
- Page 1:flower capital and coversation between shogun and furuko
- and new ninjas soldier, they are sharing straw hats posters and law pirates
- sanji and shinobu are seeing the events and free bebo and his crew
- flashback how hawkins caught law
- brook , robbin and ussop they did that smile from before
- big mom eating while kaido giving her food
- big mom remove the cuffs easily
- then attacked with sword and the weather changed
- king and queen terrified when they saw big mom
- Haki effects appeared above onigashima island after big mom sword clashed with kaido's club
- Queen did enel face while King the terrified just appeared with his eyes
- After the clash between kaido and big mom the sky cracked

Flower Capital—
Orochi is furious that they didn’t capture any of the Strawhats.
In order to capture the criminals, they increase the level of security in the Capital, and Orochi’s men starts putting up wanted posters.
Sanji and Shinobu are discussing the current situation on the rooftop.

North of Ebisu Town—
Nami is having a conversation with Bepo’s group who have escaped.
Bepo hands her a paper with the new secret code on it that’s been distributed in the cell, looks like there’re some changes.
Nami believes that she should inform Kin’emon immediately about this.
Bepo’s group begin to have a flashback on Hawkins releasing them—
Hawkins escorted Law to the cell by himself, it seems that they have made a deal with each other, or received some form of threats, Hawkins destroyed the three straw avatars of them in front of Law, and released them.
Law said to them that they can’t let the Strawhats know that he’s captured.

Between the Flower Capital and Kuri—
Orochi’s men are checking with posters in hands.
Robin and Usopp passed with their “ha?” faces.
Ashura brings them to an abandoned port in the southwest, and shows them a large ship which they can put 1000 soldiers on.

Onigashima—
Big Mom arrives at Onigashima, she’s been eating sweets nonstop. The Calamities are there as well.
She orders Kaidou’s men to take off her handcuffs, that’s when Kaidou arrives.
Her handcuffs fall to the ground and pick up Napoleon, they clash with each other! 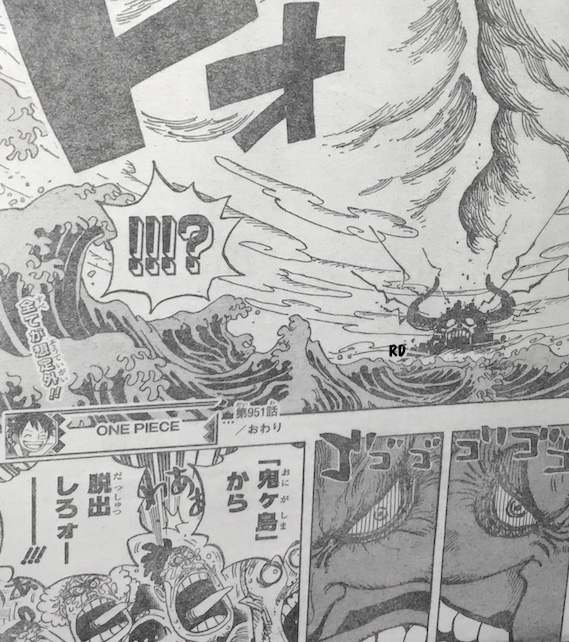